Subscribe below to be notified when
more details are available.
Thank you! We'll reach out soon with updates.
Oops! Something went wrong while submitting the form.
La bella princepessa hnft
drops on april 21st
leonardo da vinci

This holographic NFT (or “HNFT”) is the first of its kind — combining history and technology, physical and digital assets in the sale of a unique NFT, which will be up for auction on MakersPlace on April 21st.

A Multi-Gigabyte Photogrammetry Image of the Original Canvas

With the unlockable photogrammetry image included in the purchase of this work, you can explore the canvas in never before possible detail. The hologram is generated by rotation at very high speed (900 rotations per minute) of four blades containing 256 micro LEDs and microprocessors, which use an algorithm to compose the work in the air. The apparatus is contained within a crystal case of 73cm x 73cm x 12cm.

And with La Bella Principessa, you don’t even have the opportunity to view the work in person as it is one of the few remaining Leonardo’s in private hands. The original work is under lock and key held in the Geneva freeport.

The original will be part of an exhibition at a world renowned European institution this Fall, but it is not on permanent loan to a museum and has, to this point, only been on display three times since its revised attribution in 1998. The unlockable image brings new capabilities for viewing, and the hologram creates another life for the work in the physical world.

The Holoverse is the brainchild of Laserman Industries, a live performance technology group who have extended their holographic capabilities into the world of digital art.

The Holoverse team uses a formula that includes Minting an image with a minimum of 670 million Pixels as the NFT and placing the Holo NFT (“HNFT”) in the Smart Contract as a Redeemable asset.

The Holoverse team has obtained exclusive commercial rights for creating the da Vinci NFT through a collaboration with the Italian company Scripta Maneant and their partnership with the private owner of the physical painting.

Please visit The Holoverse website to learn more about the project.

The work is a profile portrait in colored chalks and ink on vellum. The piece is believed to have been taken from an important manuscript about Francisco Sforza, the founder of the ducal dynasty of Milan, and his family.

The work is a profile portrait in colored chalks and ink on vellum. The piece is believed to have been taken from an important manuscript about Francisco Sforza, the founder of the ducal dynasty of Milan, and his family.

This image depicts a fashionable young woman in a beautiful renaissance dress and hair netting. The sitter is believed to be Bianca Sforza, a young aristocrat from Milan.

It was likely commissioned by Leonardo’s employer, Ludovico Sforza, the Duke of Milan, to celebrate the marriage of his beloved but illegitimate daughter, Bianca, in 1496 to an Italian nobleman. Her future husband was the captain of the Milanese military forces and a patron of Leonardo.

Tragically, Bianca died within months of her marriage due to pregnancy complications. She was the subject of many portraits in her young life, being a great beauty born into an aristocratic family, but this was likely her last portrait.

Several historic indicators reveal this context and da Vinci’s attribution to the viewer: 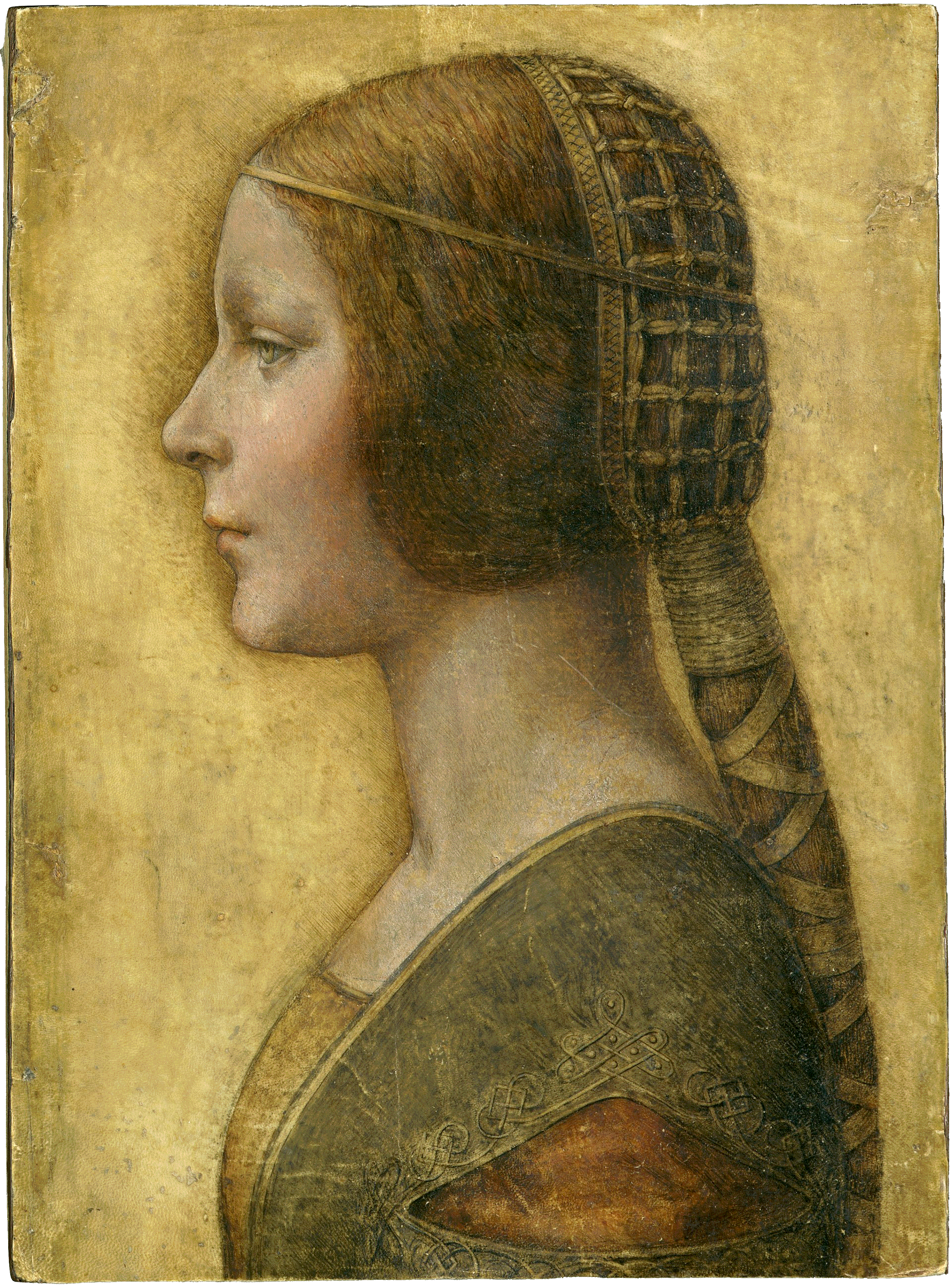 The extremely high quality of the work and the left-handed hatching are beautiful indicators of Leonardo’s authorship of the portrait.

The overall stylistic considerations of the design, such as the detail of the eye, which Leonardo believed to be “the window to the soul.”

The knotwork ornamentation in the sitter’s sleeve corresponds to patterns Leonardo explored in other works and the logo designs for his Academy.

The overall dress and hairstyle indicate that the sitter was a member of the Court of Milan during the 1490s.

The proportions of the head and face reflect the rules of portraiture that Leonardo articulated in his notebooks.

The evidence of the combination of black, white, and red chalks (the trois crayons technique). Leonardo was the first artist in Italy to use these pastels, a drawing technique he had learned from the French artist Jean Perréal, whom he met in Milan in 1494.

The vellum includes a palmprint in the chalk pigment on the neck of the sitter, which is characteristic of Leonardo’s unique blending technique.

Three stitch holes in the left-hand margin of the vellum indicate that the leaf was once in a bound volume.

Even the format of the vellum support is an exact match to the format used for several of his portraits.